Reading F.Scott Fitzgerald on his Birthday

There is no missing out on quoting Scott Fitzgerald, when the occasion so demands. As legends have it, on the occasion of the author’s funeral, among the attendees was a certain Dorothy Parker, who is said to have muttered under her breath in mourning the words of the narrator spoken during Jay Gatbsy’s funeral – ‘the poor son-of-a-bitch.’

We at Verses Inked commemorate the occasion with an analytic commentary on the the author’s poetry.

The verse in discourse, On a Play Twice Seen, was printed in the Nassau Magazine, which was published by the American Whig-Cliosophic Society – a socio-political, literary and debating society at Princeton university. In its own rights, the oldest recognized debating community in United States.

It was at Princeton University that an adolescent Fitzgerald spent the years perfecting his craft. The poem was published in the Nassau Magazine in 1917, at a time when the world was still at world war I, during in fact the author’s closing years at the university, before he was drafted and assigned to camp Sheridan on the outskirts Montgomery, Alabama and tada – the war ended. The poem is from the still early years in the poet’s life, before the author’s life in New York during the great depression , before the jazz age, and Paris and Ernest Hemingway and the commercial promises of Hollywood – factors which in their modest ways determined the categorization of the lost generation  . The poem portrays an early age university romance in the author’s life, before his association with Zelda Sayre, whom he however first met while at station at Montgomery. The year was 1918. 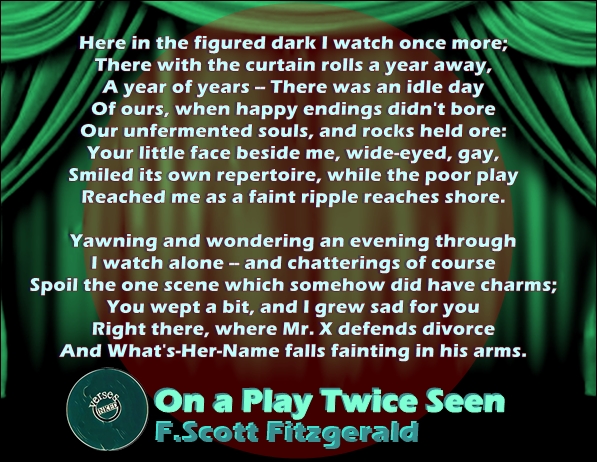 The verse itself lays out as a soft carpet of emotions which are brought forward while the poet was in audience to the same play twice with the same person, perhaps a sweetheart. Why would anyone otherwise write poetry if not for a sweetheart . The play did not much move the author either time, yet he muses in his poetry about his companion’s reaction to the ending of the play when some Mister X defends divorce and some What’s her name falls in his arms, fainting out.

The poem en capsules the passage of time through the development of a relationship  over a period of a year, among years. It relates the other’s response to the concluding scene on each occasion , how the impact is more acute the second time over and brings forward the subtle showcase of sympathy from the poet. While all prevailing emotions were downplayed during the former instance, understood as juvenility. Like we recommend at Verses Inked – shut out the sounds and let each word speak for itself, let poetry create and set its million worlds into motion. Happy birthday F Scott Fitzgerald.

ON A PLAY TWICE SEEN

Here in the figured dark I watch once more;

There with the curtain rolls a year away,

A year of years — There was an idle day

Of ours, when happy endings didn’t bore

Your little face beside me, wide-eyed, gay,

Smiled its own repertoire, while the poor play

Reached me as a faint ripple reaches shore.

Yawning and wondering an evening through

I watch alone — and chatterings of course

Spoil the one scene which somehow did have charms;

You wept a bit, and I grew sad for you

And What’s-Her-Name falls fainting in his arms.

View all posts by versesinked